Groupon Inc. is stepping up big this Valentine’s Day with promotion specials that offer lovers the chance to buy land on Mars. As the Chicago company restructures its leadership team, analysts see a slight hope for the stock in 2016.

Four analysts rate Groupon a buy, two analysts rate it a sell, and 15 rate it a hold, according to Bloomberg. The consensus target price for Groupon is $3.19. The stock closed Tuesday at $2.22, an all-time low.

“GRPN has a great shot to carry over its end-of-year momentum into 2016,” wrote Brian Nichols, research analyst at Seeking Alpha, on Dec. 27, 2015. “Not only is the stock cheap…but its Groupon Goods business continues to perform quite well.”

Groupon operates online local commerce marketplaces that connect merchants to consumers by offering goods and services at a discount. After the post-IPO stock price high of $31.41 in 2011, the stock tanked.

“Just looking at the stock chart, it says a lot about the company,” said Edward Woo, a senior analyst at Ascendiant Capital Markets, in an interview. “They had a big IPO, then had a big decline, and a big rebound, and another big decline…” 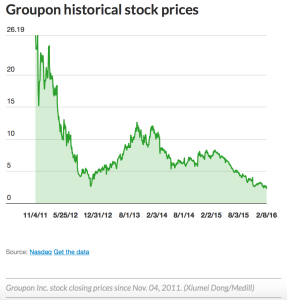 “Given what we are today, I would still see that as a buy,” said Woo, who has a $4 price target on Groupon. Woo expects the company will have another strong earnings report from the holidays, helped by a streamlining of international operations, and by accelerated growth in Europe.

Groupon reported a 4 percent increase in active customers worldwide, to 48.6 million, in the third quarter of 2015, comprising 25.2 million in North America, 15.4 million in Europe, the Middle East and Africa, and 8.0 million in rest of the world.

“Our business is actually stronger than it ever has been,” said Zachary Smith, director of Mobile Products at Groupon, at the Chicago Chief Digital Forum in November. “Last year, we sold 100 million Groupons worldwide. We’ll hopefully beat that this Q4 as well.” Groupon is slated to report fourth quarter 2015 earnings after the close on Thursday.

Groupon rejected Google’s $5 billion offer in November 2010, and filed for an initial public offering in June 2011. Since the IPO, the company has struggled to meet the public’s expectation.

As the new CEO, Williams vowed to shift the marketing strategy and simplify the business model, and has made drastic high-level management changes.

“Groupon will be focused on driving a diverse assortment of product across categories,” said Steve Tzeng, a consumer electronics buyer of Groupon. “With our strength of connecting with local businesses, we’ll be able to establish a local supply for customers.”

Groupon has been pushing to drive business in North America and other key markets, while paring down operations in Asia. In May, Groupon sold 46 percent of its stake in Ticket Monster, a South Korean e-commerce business.

“They actually shrank a lot internationally, they pulled out of a lot of emerging markets. They still show interest in India and Korea,” said Woo. “So, they are really just focusing on Europe, another big market besides the U.S.”