The struggle between publishers trying to make money online and readers trying to access particular articles behind the paywall may find a mutual ground as iMoneza, a service expanding to Chicago that allows readers to buy a single article.

The Brookfield-based company launched early this March as a cloud-based payment gateway that allows the readers to access specific content through micropayments.

“I don’t want to pay a subscription for that,” said Mike Gehl, owner and president of iMoneza. While searching for restaurant lists in another city, Gehl came to a screeching halt when he hit a paywall on a local magazine website.

“Can I just get the article for like 50 to 60 cents?”  asked Gehl. “Could I just pay per article rather than subscribe to all these publications and papers?”

Around that concept, Gehl founded iMoneza in January 2014. The company provides publications with a software plug-in that allows them to set rules for how much an article costs. The goal of the service is to help publications to increase their online revenue while offering readers the flexibility to pay for specific contents instead of being turned away by the subscription paywall.

The idea of news micropayments was not new. In February 2014, the Chicago Sun-Times announced a partnership with Bitcoin for a 24-hour trial to test the BitWall, a San Francisco-based micropayments startup. Chicago Sun-Times readers who visited the site Feb. 1 were asked to donate bitcoin payments to the Taproot Foundation, or tweet about the nonprofit, in order to read articles.

According to the number from BitWall, the experiment attracted about 700 bitcoin donors and 63 percent of donors gave about 25 cents. However, the Chicago Sun-Times did not adopt the BitWall system, instead they began to accept bitcoin for subscriptions two months later.

“Consumers are so used to getting their content for free online,” said Gehl. “Changing the consumer perception that they to have pay for content online is difficult.”

Unlike its competitors, Gehl said iMoneza specializes in micropayments under one dollar. Users can add small amounts of money to the digital “wallet”, browse through multiple sites that have implemented iMoneza, and make micropayments while avoiding credit card charges. The goal is to make the paywall as seamless as possible.

“So far iMoneza is a good solution to paid online content. They offer customizable options and it also allows users to read multiple publications with just one account,” said Katie Williams, the circulation manager for Milwaukee Magazine. 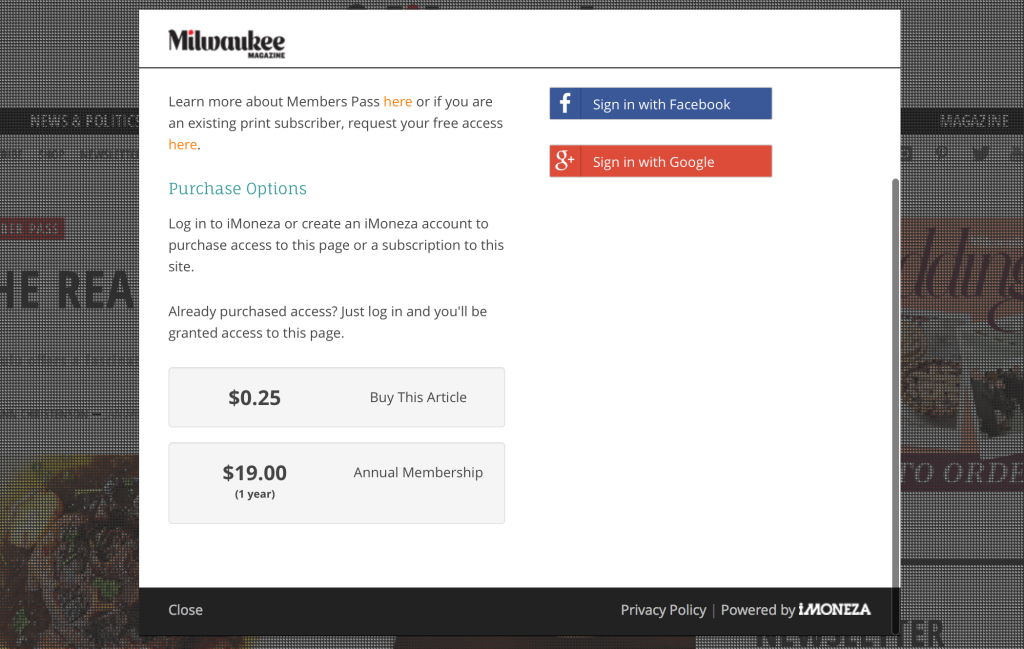 The publications that have adopted the services are Milwaukee Magazine and Rhode Island Monthly. When readers click on an article in Milwaukee Magazine’s “Member Pass” section, a paywall pops up that gives the reader an option to purchase a single article for as little as 25 cents or subscribe to the publication for $19 per year.

“I think it is a good idea. It’s kind of like iTunes trying to get individual songs instead of albums,” said David Goldman, Mechanical Design Engineer at a natural gas burner company. “If the article would appeal to just mechanical engineers, for instance, then, I think they might be willing to pay for the content.”